The Battle of Normandy, which began on D-Day (June 6, 1944), achieved a notable place in history as one of the pivotal battles of World War II that led to the Allied victory in Europe.

“You are about to embark upon the Great Crusade, toward which we have striven these many months. The eyes of the world are upon you.” — President Dwight Eisenhower to troops before the invasion

The meticulously planned invasion was one of the largest amphibious military assaults in history and resulted in the liberation of northwestern Europe from the Nazis. As part of an extensive deception plan, the Allies had misled the Germans into thinking the main invasion would take place on a different date and place. Among their many ruses, the Allies created a phantom army, complete with fake equipment to fool Nazi aerial reconnaissance, real generals in command, and a vast radio network that stayed in place when the real military units stealthily moved to their departure seaports to board the invasion fleet.

About 156,000 American, British and Canadian soldiers landed on five beaches along a 50-mile stretch of France's Normandy region. Thousands of Allied forces were killed or wounded in battle, but on June 11, the beaches at Normandy were fully secured.

After Normandy, the Allies continued to fight their way across Europe, and by the end of August 1944, they had reached the Seine River, liberating Paris.

Martial law was imposed hours after the Dec. 7, 1941, attack on Pearl Harbor and was in place in Hawaii for almost three years — the longest period ever in US history.

President Franklin D. Roosevelt authorized martial law given the potential for an invasion by Imperial Japan military forces and doubts about the loyalty of Hawaii’'s ethnic Japanese community, which comprised 37 percent of the islands' population.

Under martial law, the U.S. Army's commanding general of the Hawaiian Department became the military governor of Hawaii, assuming vast executive, legislative and judicial powers. There were many restrictive outcomes of martial law that affected Hawaii residents, but particularly those of Japanese ancestry. A curfew was imposed; media, radio broadcasts, telephone calls and civilian mail were censored; and Japanese language schools were closed. Civil courts also were replaced by military courts, with the army forbidding jury trials. Civilians brought before military provost courts were denied constitutional guarantees of due process and writ of habeas corpus.

By mid-1942, discontent with martial law escalated. Although the Roosevelt Administration initially rejected attempts to scale back the restrictions, a compromise was reached on March 10, 1943 that returned most functions of civilian government, except for labor, to civilian agencies. Martial law and the supremacy of the Military Governor, however, was not ended until Oct. 24, 1944.

On Dec. 17, 1944, President Roosevelt announced that Japanese Americans interned on the West Coast would return to their homes.

AJAs had suffered great indignities at internment camps, which were surrounded by barbed wire, patrolled by guards and known for their poor conditions. Along with the emotional impact of imprisonment, internees lost jobs, possessions and endured lengthy family separations.

While the closing of the camps would seem to end a painful chapter for Japanese Americans, it did not bring an end to the discrimination. After their release, internees still encountered intense prejudice, with some being greeted with “No Japs allowed” signs upon their return.

With the defeat of Nazi Germany in sight, the three Allied leaders convened from Feb. 4–11, 1945 at Yalta, a Black Sea resort located on the Crimean peninsula. The purpose of this major conference was to negotiate Soviet support for the war against Japan and plan for a post-war Europe.

Along with agreeing to demand Germany's unconditional surrender, Stalin agreed to permit free elections in Eastern Europe and enter the war against Japan in the Pacific, in exchange for a promise that lands lost to Japan would be returned to the Soviet Union.

Most of these agreements were kept secret, but controversy arose in the early stages of the Cold War when Stalin broke his promise of free elections in Eastern Europe and installed governments dominated by the Soviet Union. 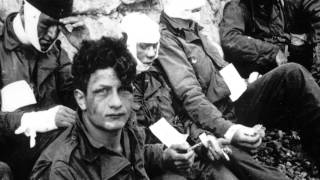 The D-Day invasion by Allied forces at Normandy, France is successful. The final phase of the war to defeat the Nazis and liberate Europe begins.