On Feb. 19, 1942, in the aftermath of Pearl Harbor, President Franklin D. Roosevelt signed Executive Order 9066, authorizing military areas from “which any or all persons may be excluded." Although the order did not mention Japanese Americans by name, it led to some 110,000 Americans of Japanese Ancestry living on the West Coast to be incarcerated in remote internment camps.

Mass eviction of US citizens of Japanese Ancestry from their homes, farms and businesses, and imprisoning them under armed guard in so-called internment camps is now regarded as one of the most flagrant violations of the civil rights of American citizens.

Anyone who was at least 1/16th Japanese was evacuated, including children and the elderly. The camps were located in remote areas, surrounded with barbed wire and guards in machine gun-equipped towers, with substandard structures likened to “tar paper shacks” for their cramped and crowded living quarters.

The internment camps, where AJAs were isolated and held for most of the war period, are now regarded as one of the most flagrant violations of the civil rights of American citizens in the 20th century.

While Executive Order 9066 had its critics within Roosevelt’s Administration, proponents convinced the president there was “military necessity” to carry it out. The U.S. Supreme Court upheld the constitutionality of the order, and it remained in place until Feb. 19, 1976, when President Gerald Ford terminated it.

However, in Hawaii AJAs were not subjected to mass internment because of lobbying efforts by prominent local leaders in Hawaii, Hawaii's military governor (Lt. Gen. Delos Emmons), and FBI Director J. Edgar Hoover. But on Feb. 21, 1942, the first group of Japanese aliens from Hawaii were ordered from the Sand Island detention camp on Oahu to mainland camps. Eventually, about 2,270 Japanese aliens and Japanese-American citizens were sent to mainland internment camps.

In February 1942, a group of University of Hawaii ROTC members, who had been summarily discharged when the Hawaii Territorial Guard was terminated, formed the Varsity Victory Volunteers (VVV or "Triple V") to provide manual labor support for the U.S. Army's 34th Engineers at Schofield Barracks.

The undergraduates formed the VVV as a way to contribute to the war effort and counter the “enemy aliens” designation that loomed over Americans of Japanese Ancestry following the Pearl Harbor attack.

For one year, 169 AJAs served in the VVV, while the mass incarceration of Japanese Americans unfolded on the mainland. The multi-ethnic labor battalion, composed of both college students and those not in school, took on various tasks, including breaking rocks into gravel, surfacing roads and giving blood. They became a beacon of hope for inclusion, demonstrating to the national public that Japanese Americans were wholeheartedly behind the US war effort.

Their volunteer efforts paved the way for the VVV to disband in January 1943, so its members could join the 442nd Regimental Combat Team or the Military Intelligence Service as Japanese language experts.

In November 1943, 142 Nisei volunteered for the Women’s Army Corps. Because they were a small group, they were not segregated, but instead served alongside other ethnic groups, performing clerical and other duties. Those who were fluent in Japanese were asked to translate Japanese military documents, and eventually some were sent to the Military Intelligence Language School for training.

This was Life for Japanese-Americans During WWII 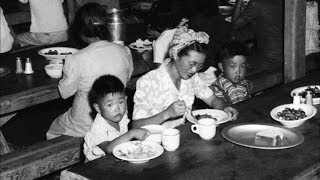 Executive Order 9066 is signed by President Roosevelt, This is used as the legal basis for evacuation of persons of Japanese ancestry from the West Coast states. About 110,000, most of whom are US-born American citizens, are sent to remote internment camps, where they are held for most of the war period.

First AJAs from Hawaii are sent from the Sand Island detention camp on Oahu to mainland camps. More follow in 1942 and 1943, bringing the total to about 600.

Varsity Victory Volunteers are organized on Oahu with 169 University of Hawaii ROTC students. They are assigned as a labor battalion.

First family groups leave Hawaii to join their fathers and husbands in mainland internment camps. More follow in 1943, eventually totaling about 900 who were incarcerated.