About 1,500 Americans of Japanese Ancestry (AJAs) became members of the 298th and 299th Regiments of the Hawaii National Guard after initiation of the first peacetime draft in October 1940. Following the bombing of Pearl Harbor on Dec. 7, 1941, the AJAs of the 298th and 299th were used primarily in construction tasks preparing defense installations for defense of the islands, with suspicions hovering about whether they would be loyal to the United States.

In May 1942, US Military Intelligence determined that a major Japanese naval armada was headed toward Midway, an atoll located northwest of Hawaii. With concerns that the AJA soldiers might pose security problems in the event of a Japanese invasion, General George Marshall transferred them into a newly created unit that was named the Hawaiian Provisional Infantry Battalion and prepared to remove them to the mainland.

On June 5, 1942, during the Battle of Midway, the 1,432 Nisei solders of the Hawaiian Provisional Infantry Battalion were shipped via the SS Maui for training at Camp McCoy in Wisconsin. When they landed in San Francisco after a week’s voyage, the unit was re-designated the 100th Infantry Battalion (Separate), with six infantry companies. They would ultimately become the first group of Nisei to see combat in the European Theater during World War II.

While at Camp McCoy, members of the 100th Infantry demonstrated extraordinary discipline and skill in basic training. They received more training at Camp Shelby in Hattiesburg, Mississippi and in Louisiana. Eventually, their abilities as well as ongoing lobbying efforts convinced the War Department to order them into combat. On Aug. 21, 1943, after four separate basic training sessions, the men joined a convoy headed for the European Theater. In a matter of weeks they would enter combat in Italy.

Despite the designation of AJAs as aliens not subject to the draft (4-C) after Pearl Harbor, the War Department and President Roosevelt agreed to create a segregated unit composed of volunteer Nisei soldiers. The formation of the 442nd Regimental Combat Team (RCT) came about after the 100th Infantry Battalion established a sterling training record, and the Varsity Victory Volunteers received positive publicity for their volunteer labor for the U.S. Army. There also was a need for more troops as fighting escalated on various fronts.

The 442nd RCT was officially activated on Feb. 1, 1943. For an authorized strength of about 4,200 men, 10,000 AJAs in Hawaii volunteered. The following month 2,686 of them were selected. Along with about 1,500 from the mainland (volunteers from internment camps and Nisei already in other Army units), they were sent to Camp Shelby in Mississippi for basic training. 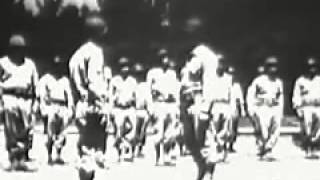 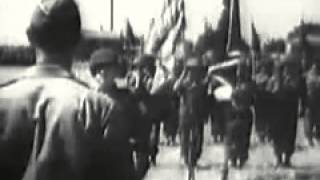 Some 1,432 Nisei soldiers who were in the U.S. Army before Pearl Harbor, depart Hawaii on SS Maui for training at Camp McCoy in Wisconsin, becoming the 100th Infantry Battalion.

War Department orders activation of an Infantry Regiment, with a Field Artillery Battalion and Engineer Company, all to be composed of Japanese Americans.

First cadre of the 442nd Regimental Combat Team reports to Camp Shelby, Mississippi, to prepare for arrival of the Nisei soldiers who will form the ranks.

After more than a year during which Americans of Japanese descent were declared enemy aliens, 2,686 Nisei of almost 10,000 who volunteered are inducted in Hawaii to join the 442nd.

Volunteers for the 442nd Regimental Combat Team depart Hawaii bound to Camp Shelby in Mississippi, for basic training (over 100 have families in internment camps).