“The Cairo and Teheran conferences, however, gave me my first opportunity to meet the Generalissimo, Chiang Kai-shek, and Marshal Stalin, and to sit down at the table with these unconquerable men and talk with them face to face.” — President Franklin D. Roosevelt’s Fireside Chat on Dec. 24, 1943

At the first Cairo Conference, held Nov. 22–26, 1943, in Cairo, Egypt, Roosevelt met with China’s President Chiang Kai-shek and Britain’s Prime Minister Winston Churchill to outline the Allied position against Japan and plan for a postwar Asia.

In the Cairo Declaration, jointly released by the United States, Republic of China and Great Britain on Dec. 1, 1943, the countries vowed to continue fighting Japan and to strip Japan of all the territories it had conquered since 1914, including Chinese territories and Korea.

After the first Cairo Conference, Churchill and Roosevelt headed to Iran for the Tehran Conference with Joseph Stalin, Premier of the Soviet Union. The three leaders agreed to meet on Nov. 28, 1943, to discuss D-Day war strategy and how to defeat Japan.

At the end of the Tehran Conference on Dec. 1, 1943, Roosevelt and Churchill returned to Cairo for the second Cairo Conference, on Dec. 2–7, 1943. They unsuccessfully tried to persuade Turkey’s President İsmet İnönü to join the Allies in the war. Roosevelt also told Churchill that General Dwight D. Eisenhower would become supreme commander of the Normandy Invasion. 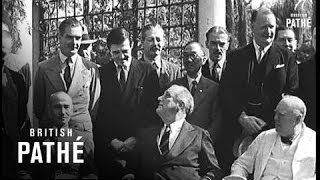 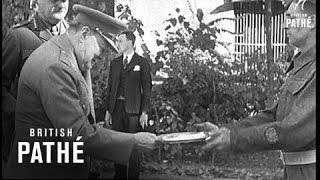 Nov. 25, 1943 – Cairo Conference to establish agreements for the war and postwar in Asia

Nov. 28, 1943 – Tehran Conference for agreement on Allied invasion of France

Photos courtesy of:
Library of Congress
U. S. National Archives and Records Administration