Skip to main content
Atomic bombs dropped on Japan
“It seemed as if the earth itself emitted fire and smoke, flames that writhed up and erupted from underground. The sky was dark, the ground was scarlet, and in between hung clouds of yellowish smoke. Three kinds of color — black, yellow, and scarlet — loomed ominously over the people, who ran about like so many ants seeking to escape... It seemed like the end of the world.” —Tatsuichiro Akizuki, Nagasaki, morning of Oct 9, 1945

The Potsdam Conference was the last of three Allied meetings held during World War II. At this final gathering, US President Harry S. Truman, British Prime Minister Winston Churchill (and his successor, Clement Attlee) and Soviet Premier Joseph Stalin were in attendance.

The Conference took place near Berlin, from July 17 – Aug. 2, 1945, with a primary agenda of establishing postwar plans for Germany. At the earlier Yalta Conference, Stalin, Churchill and then US President Franklin D. Roosevelt had agreed to reconvene after Germany surrendered to determine Europe’s postwar borders.

At Potsdam, the Allied leaders agreed there would be “a complete disarmament and demilitarization of Germany.” All discriminatory laws from the Nazi era would be repealed; German war criminals would be arrested; and Germany's educational and judicial systems would be purged of authoritarian influences. They also set land boundaries and reparations.

In addition to defining postwar Europe, the leaders of the allied nations addressed bringing the war in the Pacific with the Japanese Empire to a conclusion. The fire that had been raging had to be completely extinguished without fear of a residual smoldering that could re-ignite in the future. Authoritarian, militaristic government would be replaced by a citizen-focused democracy that could control a small, defense-oriented military. This could only be effected via unconditional surrender and total occupation and control by the allied powers for some years following the end of the war. The model established for putting out the fire in Europe was to be the model for Asia.

This was set forth in the Potsdam Declaration from the Allies to the Japanese Empire. Signed by the United States, United Kingdom and China, it was issued on July 26, 1945, demanding Japan’s “unconditional surrender” or face “prompt and utter destruction.” The Soviet Union did not sign the declaration because it had yet to declare war on Japan.

At Potsdam, Truman told Stalin about the United States' atomic bomb, which was intended to use against Japan if they rejected the ultimatum. Stalin, however, already knew about the US nuclear program through Soviet spies in America.

US drops atomic bomb on Hiroshima and Nagasaki

Despite Germany’s unconditional surrender, thus ending the war in Europe, Japan’s leaders ignored the Allied ultimatum of the Potsdam Declaration and vowed to fight on.

Fulfilling to the ominous warning to Japan about facing “prompt and utter destruction,” the United States on Aug. 6, 1945, dropped an atomic bomb on Hiroshima, Japan.

General Douglas MacArthur and other top military commanders had pushed to continue with conventional bombing of Japan, but Truman believed the atomic bomb would lead to a quick end to the war, ultimately saving millions of lives.

Thus, on that fateful Monday morning, he ordered an attack with the world’s first atomic bomb used in war. Dropped by an American B-29 bomber named “Enola Gay,” it destroyed five square miles of Hiroshima and immediately killed 80,000 people. Tens of thousands would later die of burns and radiation exposure.

“We turned back to look at Hiroshima. The city was hidden by that awful cloud... boiling up, mushrooming, terrible and incredibly tall,” said US pilot Col. Paul Tibbets, expressing his reaction to the foreboding cloud concealing the city below.

President Truman then issued a second warning to surrender:

“We are now prepared to obliterate more rapidly and completely every productive enterprise the Japanese have above ground in any city. We shall destroy their docks, their factories, and their communications. Let there be no mistake; we shall completely destroy Japan’s power to make war.”

Still, even amid this mass destruction, Japan's military leaders refused to surrender.

Three days later, on Aug. 9, 1945, a second B-29 dropped an atomic bomb, this time on Nagasaki. Weighing nearly 10,000 pounds, the bomb was more powerful than the one used at Hiroshima. Between the two bombs striking Japan, within four months at least 129,000 people had been killed, with higher estimates of double this number; they were mostly civilians.

On Aug. 15, Emperor Hirohito announced Japan's unconditional surrender in a radio broadcast, citing the devastating power of “a new and most cruel bomb.”

The atomic attacks on Hiroshima and Nagasaki remain the only instances where nuclear weapons were used in war, and the controversy over this decision continues. The question of whether the United States had the moral and legal justification to cause intentional mass destruction to win the war is still debated today. 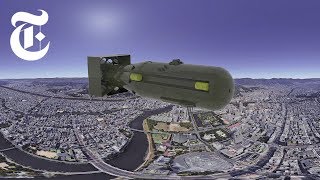 Potsdam Declaration by the United Kingdom, United States and China demands unconditional surrender of Japan and warning of prompt and utter destruction otherwise.

US drops atomic bomb on Hiroshima, Japan, killing 80,000 people in an instant.

US drops atomic bomb on Nagasaki, Japan. Although this bomb was more powerful than the one used at Hiroshima, many people were shielded by the hilly terrain of the city. Still, it has been estimated that between immediate casualties and the effects of radiation poisoning over time, ultimately 87,000 people died from this second atomic bomb.