Despite being officially declared “enemy aliens” by the U.S. government, many Americans of Japanese ancestry (AJAs) took advantage of opportunities to show their loyalty to the United States during World War II.

“The principle on which this country was founded and by which it has always been governed is that Americanism is a matter of the mind and heart; Americanism is not, and never was, a matter of race or ancestry.” — President Franklin D. Roosevelt on activating the 442nd Regimental Combat Team

In the aftermath of Pearl Harbor, in Feb 1942 Japanese-Americans were reclassified by the draft system as “aliens ineligible for service,” and prohibited from serving in the US military. An exception was made for Nisei in the 298th and 299th Infantry Regiments, since they had already joined the US military prior to the attack. Later in 1942 they became the 100th Infantry Battalion.

On Feb. 1, 1943, the War Department reclassified Nisei men allowing them to volunteer to serve in the U. S. Army. In conjunction, President Roosevelt announced the formation of the 442nd Regimental Combat Team, an all-Japanese American unit led by white officers.

Roosevelt made this decision after intense lobbying from supporters of the Japanese-American community. The stellar reputation of the 100th Infantry Battalion, along with the highly publicized deeds of the Varsity Victory Volunteers and the need for more combat troops were other factors.

A call went out for volunteers for the 442nd, with an initial goal of 4,200 men. On the mainland, where tens of thousands of Japanese-Americans were interned, only 1,500 volunteered. But in Hawaii, where mass internment had not taken place, more than 10,000 AJAs stepped forward. Of these, 2,686 were accepted and sent to Camp Shelby, Mississippi for basic training.

Shortly after the first AJA's in Hawaii were inducted into the new 442nd, a call was issued for volunteers from Hawaii to join the Military Intelligence Service. Over 500 AJA's joined up.

It was not until early 1944 that the Selective Service System classification was revised and Japanese-Americans could finally be called for service by the draft boards.

Their involvement began in February 1943, when the US Army Nurse Corps (ANC) began accepting Nisei women among their ranks. Nine months later, the Women’s Army Corps (WAC) did the same.

Previously, Nisei women were prohibited from joining these groups because of their “enemy aliens' status. But after Nisei men were allowed to join the military in early 1943, opportunities opened for Nisei women as well.

Unlike with Nisei men, who were primarily placed in Japanese-American military units, Nisei women were not segregated since their numbers were small. But like Nisei men, they served to show their loyalty to the United States and make their families proud. Some also wanted to travel and gain job skills that could be leveraged after the war.

By October 1945, 142 Japanese-American women volunteered for the WAC, far fewer than the 500 who would have been allowed. Most of these volunteers were assigned clerical work. Those who knew Japanese received training in the Military Intelligence Service Language School (MISLS) at Fort Snelling, Minnesota, to become translators.

Kauai native Chito Isonaga, who joined the Women's Army Corps in 1944, was one of those sent to Fort Snelling. After training at the MISLS, she was deployed in August 1945 to Japan to work as a translator. She remained in this role in Japan, even after the war ended and the WAC was disbanded. She then worked for the Central Intelligence Agency from the 1950s to the 1970s.

During World War II, First Lady Eleanor Roosevelt visited many places on behalf of the country and her husband, Franklin D. Roosevelt. She was an active First Lady and an outspoken activist, fighting on behalf of civil rights, the poor, and women.

She arrived in Hawaii on Aug. 17, 1943, during her five-week tour of the South Pacific. During her time in Hawaii, she visited hospitals, the Red Cross headquarters, the Honolulu Academy of Arts, the YWCA, the Governor's house and met with rank-and-file soldiers and military leaders.

During her visit she became convinced that the doubts about the loyalty of Japanese Americans were unfounded. After her return she undoubtedly had an influence on President Roosevelt's decision to support the formation of the 442nd Regimental Combat Team as a Nisei combat unit.

Experiences of a Female Nurse during World War II 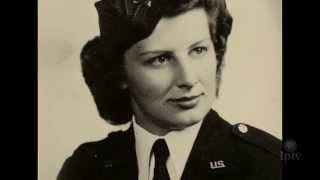 The War Department reclassifies Nisei men, allowing them to be drafted and to serve in the U.S. Army.

The War Department reclassifies Nisei men, allowing them to volunteer and serve in the U.S. Army.

First Lady Eleanor Roosevelt arrives in Hawaii during her five-week tour of the South Pacific. She learns first hand that Japanese Americans are fiercely loyal to the US and want the opportunity to prove it in battle.

Nisei women are allowed to serve in the Women's Army Corps (WAC). By the end of the war 142 had volunteered.