The Military Intelligence Service (MIS), comprised mostly of Japanese-Americans, played a decisive role in the U.S. victory over Japan during World War II.

Unlike the 442nd Regimental Combat Team or 100th Infantry Battalion, the nearly 6,000 translators and interpreters were not the subject of news stories about their successes — the MIS work was secret during the war and long after. They were in every major battle launched against the Japanese, providing vital intelligence services, such as decoding intercepted Japanese military orders, translating captured enemy documents and interrogating Japanese prisoners of war.

The MIS served as undercover agents in the Philippines; fought with Merrill's Marauders in Burma; and landed with the Marines on the beaches of Iwo Jima. Major General Charles Willoughby, Intelligence Chief for General Douglas MacArthur, credited the MIS for shortening the Pacific war by two years.

After the war the MIS Nisei were tapped for critical assignments during the occupation of Japan. Nisei interpreters worked closely with American and Japanese officials to recover the war-torn nation and restore a peacetime government. They also worked as translators during war crimes trials held in Japan, China, the Philippines, French Indochina and the East Indies.

The origins of the MIS date back to November 1941, when a small group of 60 US soldiers, mostly Japanese-Americans, were sent to a secret Japanese language training program, initiated as the Fourth Army Intelligence School. It was first located at the Presido in San Francisco, then moved to Camp Savage, Minnesota in May 1942, when Japanese Americans were banned from California. It was then renamed the Military Intelligence Service Language School

Recruits of the MIS came from the Army, then later from internment camps, and were trained as interrogators, interpreters, translators, radio announcers and propaganda writers. They also served as combat infantrymen when called on, and for the exceptionally dangerous task of “Cave Flusher,” talking suicidal Japanese soldiers into coming out of caves and surrendering.

In June 1942, victory in the Battle of Midway allowed Allied forces to take the offensive in the Pacific. Prior to the battle, the Japanese had successfully captured territory across Asia and the Pacific and were threatening to expand their reach. But after intercepting Japanese radio communications, the U.S. Pacific Fleet surprised Japanese forces, sinking four carriers that had attacked Pearl Harbor.

MIS played a role in the last stages of the Battle of Guadalcanal — considered the major turning point of the ground war in the Pacific. Victory in this battle allowed Allied forces to assume offensive operations until the end of the war.

Japanese soldiers had been stationed in Guadalcanal in the Solomon Islands, when U.S. Marines launched a surprise attack and took control of an air base under construction. A series of battles ensued, with the Japanese ultimately withdrawing in February 1943. The Japanese had lost two-thirds of their troops on the island, including their elite group of naval aviators. After Guadalcanal, a severely weakened Japan was vulnerable to domination by US military forces.

On Feb. 24, 1944, 14 MIS solders began a 1,000-mile mission with Merrill’s Marauders in Burma, a U. S. Army special operations jungle warfare force led by Maj. Gen. Frank Merrill. Their mission was to cut Japanese communications and supply lines between China and Burma. To accomplish this, the Marauders trekked on foot through harsh jungle terrain, engaging in combat with the Japanese multiple times and throwing the enemy into confusion.

The group was awarded the Distinguished Unit Citation in July 1944, re-designated the Presidential Unit Citation in 1966. Every member of the commando force also received the Bronze Star, a very rare distinction for an entire unit. Three Nisei interpreters, along with Marauders’ leaders, were inducted into the U.S. Army Ranger Hall of Fame.

The Battle of Manila, which started Feb. 3, 1945, was a major, brutal battle in the Philippines fought by American and Filipino forces against the Japanese. The month-long conflict led to the death of more than 100,000 Filipino civilians and 1,000 US soldiers, as well as the complete destruction of the capital city. It also ended almost three years of Japanese military occupation in the Philippines.

MIS soldiers, sent to Luzon in the Philippines, engaged on the battlefield as well as provided Japanese language services. Among the American soldiers who took part in the Luzon campaign were Kenji Uyesugi, who helped negotiate the release of 275 women and children held hostage by the Japanese at Santo Tomas University in Manila, and William Ishida, who earned a Silver Star for helping to release the nearly 3,800 civilians interned at Santo Tomas.

Although Manila was secured on March 4, fighting in Luzon continued for several months. During that time, Nisei in the MIS helped process suspected war criminals and also took part in the surrender and later trial of General Tomoyuki Yamashita, commanding general of the Japanese Imperial Army in the Philippines.

Battle of Iwo Jima and Okinawa

More than 100,000 U.S. Marines landed on Iwo Jima on Feb. 19, 1945, accompanied by MIS linguists. By mid-March, US military forces had seized control, but with massive bloodshed. The Battle of Iwo Jima resulted in 26,000 U.S. casualties, including 6,800 killed. Only 1,000 of 20,000 Japanese defenders remained, and they eventually were captured with the help of the MIS, who entered caves urging Japanese soldiers to surrender. The capture of Iwo Jima was heralded a key victory for Allied forces that made a Japan defeat appear inevitable.

US forces then moved on to the Battle of Okinawa, which unfolded on April 1, 1945 and resulted in the deaths of more than 50,000 Americans and more than 150,000 Japanese, many of them Okinawan civilians. Hundreds of MIS members were deployed for this battle, including 200 Nisei pulled out of basic training in Hawaii and sent directly to Okinawa.

Many other Nisei linguists continued to serve in Guam, the Philippines, China, Burma and dozens of Pacific outposts. 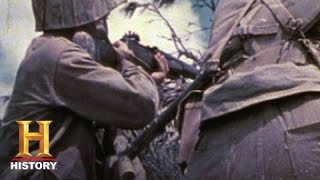 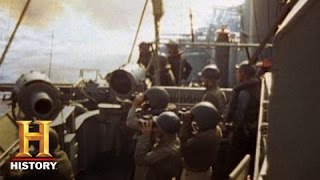 US victory in the Battle of Midway Island assures that Japan will not be invading Hawaii.

Japanese Americans of the Military Intelligence Service (MIS) support the Battle of Guadalcanal. This battle, which lasted until Feb 7, 1943, was the major turning point of the ground war in the Pacific. Victory in this battle resulted in the Allied forces sustaining offensive operations to the end of the war.

Merrill’s Marauders begin Burma operations against Japanese forces with 14 MIS soldiers; they march 1,000 miles before their mission is completed.

Battle of Okinawa, ends in June. In aftermath, MIS saves thousands of civilians and some Japanese soldiers by coaxing them from hiding places in caves.