After the US dropped atomic bombs on Hiroshima and Nagasaki, decimating both cities and killing some 129,000 people, Japan's Emperor Hirohito on Aug. 15, 1945, announced Japan's unconditional surrender, citing the devastating power of “a new and most cruel bomb.”

“It is my earnest hope and indeed the hope of all mankind that from this solemn occasion a better world shall emerge out of the blood and carnage of the past.” — US General Douglas MacArthur, on Sept. 2, 1945, aboard the USS Missouri in Tokyo Bay

Although Japan's defeat appeared inevitable from earlier in the summer, the Japanese Empire vowed to fight on. The devastation caused by the atomic bombs, however, convinced Japan that it had no option but to succumb, or risk complete annihilation.

On Sept. 2, 1945, Japanese officials signed the Instrument of Surrender while aboard the USS Missouri in Tokyo Bay, bringing an end to World War II, a devastating global conflict that led to countless casualties and extreme hardships throughout the Pacific and Europe.

“We have resolved to pave the way for a grand peace for all the generations to come by enduring the unendurable and suffering what is insufferable,” Emperor Hirohito said in a radio broadcast announcing Japan’s surrender.

Japan’s surrender was immediately followed by huge celebrations in the United States and other Allied nations. While Sept. 2, 1945 is regarded as the official VJ Day (Victory over Japan), Aug. 15, 1945 (Aug. 14 in the United States) was initially celebrated as VJ Day because that’s when Japan announced its surrender.

In Washington, crowds gathered on the White House lawn as President Harry S Truman said: “This is the day we have been waiting for since Pearl Harbor. This is the day when fascism finally dies, as we always knew it would.”

Equally joyous celebrations took place in the Philippines, Canada, Great Britain, Australia, Korea and other areas across the globe. Celebrations were far more subdued after Japan officially surrendered on Sept. 2, likely due to the solemn realization of the war’s devastation. More than 400,000 Americans—and an estimated 65 million people worldwide—had died in the conflict.

Surrender of the Bonin Islands

On Sept. 3, 1945, Lieutenant General Yoshio Tachibana, who signed Japan's surrender documents, surrendered the Bonin Islands while aboard the USS Dunlap (DD 384). The ceremonies took place off Chichi Jima, an island southeast of Honshu. Tachibana was later convicted and executed for war crimes committed against captured US aviators during the war.

Although the war was officially over, thousands of Nisei in the Military Intelligence Service, who served as Japanese language translators during the war, remained in Japan during the occupation to provide vital linguistic services.

These Americans of Japanese ancestry assisted in disarming Japan, installing a civil government, prosecuting war crimes and waging early stages of the Cold War against the Soviet Union.

Nisei interpreters worked with prefectural officials and Marine officers in rebuilding Nagasaki and other cities. They served as interpreters during the prosecution of Japan’s military leaders for war crimes in Japan, China, the Philippines, French Indochina and the East Indies. MIS also were involved in drafting a new Japanese constitution; implementing new land laws; monitoring mass media in Japan; and detecting subversive activities as part of the Counter Intelligence Corps.

As Americans of Japanese ancestry, they were vital in helping Japan and the United States reconcile their differences and develop stronger bonds. Although loyal to the United States, the Nisei translators expressed compassion toward the Japanese people and were motivated to see Japan rebuild its shattered cities.

Many MIS remained in Japan until the occupation ended in 1952. Because their work was classified, their contributions weren't publicly known until many years later when the classifications were removed.

The first group of internees, approximately 450 people of Japanese ancestry, returned to Hawaii from mainland internment camps on Nov. 14, 1945.

AJAs in Hawaii had not been subjected to mass internment because of lobbying efforts by prominent local leaders in Hawaii, Hawaii's military governor (Lt. Gen. Delos Emmons) and FBI Director J. Edgar Hoover.

About 39 percent of Hawaii’s population were of Japanese ancestry and detaining so many people would have been logistically difficult and extremely disruptive to the local economy. Still, approximately 2,270 Japanese aliens and Japanese-American citizens in Hawaii were sent to mainland internment camps.

Internees were long haunted by the time they spent imprisoned at the various camps, which came to be characterized as being one of the most flagrant violations of the civil rights of American citizens in the 20th century.

In 1948, the US government distributed $37 million in reparations, considered a small sum for the injustices that took place. Then in 1988, Congress provided an official apology and an additional payment of $20,000 each to approximately 60,000 surviving internees. The US government acted only after a decade-long campaign by the Japanese American community.

“Yes, the Nation was then at war, struggling for its survival, and it's not for us today to pass judgment upon those who may have made mistakes while engaged in that great struggle,” President Ronald Reagan said upon signing the 1988 restitution bill. “Yet we must recognize that the internment of Japanese-Americans was just that: a mistake. For throughout the war, Japanese-Americans in the tens of thousands remained utterly loyal to the United States. Indeed, scores of Japanese-Americans volunteered for our Armed Forces, many stepping forward in the internment camps themselves. The 442d Regimental Combat Team, made up entirely of Japanese-Americans, served with immense distinction to defend this nation, their nation. Yet back at home, the soldiers' families were being denied the very freedom for which so many of the soldiers themselves were laying down their lives.”

Footage of the Moment the Japanese Surrendered 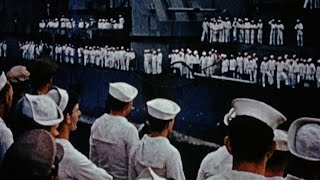 Japan signs Instrument of Surrender on battleship USS Missouri in Tokyo Bay; MIS participation; known in US as VJ Day.