Although Pearl Harbor was the pivotal event launching the war between the United States and Japan, tensions between the two countries had been escalating for many years prior to 1941.

The 1924 U.S. Exclusion Act, which barred Japanese immigration to the United States was a key development that triggered Japanese ire.

“If that Immigration Law had excluded all immigration, Japan would not have resented it, and could not have.” — The Japan Times and Mail

Also known as the Johnson-Reid Act, the Exclusion Act ended further immigration from Japan and restricted the number of immigrants from Southern and Eastern Europe.

The bill came after years of widespread anti-foreign sentiments in the United States, fueled by the Red Scare of 1919, which led Americans to fear communism, anarchism and radical leftism. Supporters of immigration legislation argued that Japanese immigrants were economic threats and were not assimilating into American society. They also believed in Anglo-Saxon superiority and regarded Japanese immigrants as unwelcome foreigners.

Japan’s ambassador, Masanao Hanihara, cited Japan’s strong opposition to the bill in a letter submitted on April 10, 1924: "I realize, as I believe you do, the grave consequences which the enactment of the measure retaining the particular provision would bring."

Despite the pushback, House legislators forwarded the bill to the Senate where it was passed. On May 24, 1924, President Calvin Coolidge signed the bill into law.

Japan reacted in anger, and both Hanihara and American ambassador to Japan Cyrus E. Woods resigned in protest. Japan's English language newspaper, The Japan Times and Mail, wrote: “It is discrimination, which both the Japanese government and the Japanese people resent."

The passage of the Exclusion Act prompted Japan to take an increasingly more aggressive military stance against the United States and its allies.

On Sept. 18, 1931, Japan shocked the world by invading Manchuria, then occupying several strategic points in South Manchuria. The United States Minister to China described it as an aggressive act by Japan that violated Japan’s obligations under the Kellogg-Briand Pact of Aug. 27, 1928.

Although Japan denied it had territorial ambitions in Manchuria, it established the puppet state of Manchukuo, which the United States refused to recognize.

Relations between the two countries were further damaged in July 1937, after the Marco Polo Bridge Incident, which involved Chinese and Japanese troops near the bridge outside Beijing (then called Beiping). This incident began on the night of July 7, when Japanese soldiers demanded entry to search for a soldier but were refused. Both sides began fighting, which soon spread to other regions. By 1927, the fighting expanded into full-scale conflict –  the Second Sino-Japanese War.

Japan’s aggression in China included the United States. On Dec. 12, 1937, Japanese warplanes attacked and sank the USS Panay (PR-5), a U.S. Navy ship on patrol near Nanking, China. Two sailors were killed and 23 wounded. Five civilians aboard the ship were wounded.

Two years later, on July 26, 1939, the United States rescinded the 1911 Treaty of Commerce and Navigation with Japan, which had provided most-favored-nation treatment between the countries and established laws regarding commerce, navigation, property rights, residence, travel, protection of laws and access to courts.

Meanwhile, in Hawaii Robert Shivers arrived in Honolulu in August 1939 to head the Hawaii FBI, with a primary assignment of assessing whether the 160,000 Issei and Nisei would be loyal in the event of war with Japan.

Shivers ultimately would play a major role in preventing mass incarceration after Pearl Harbor, by lobbying against the forced removal of Hawaii’s Japanese-American community. He also helped mobilize the 442nd Regimental Combat Team and became a highly regarded leader in Hawaii. 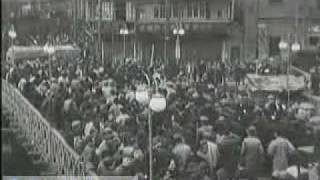 On Sept. 18, 1931, Japan invades and occupies Manchuria. This is followed by aggressive actions against China, culminating in the invasion of China on July 7, 1937.

On Dec. 12, 1937, Japanese warplanes attack and sink the USS Panay (PR-5), a U.S. Navy ship on patrol near Nanking, China that had been protecting US lives and shipping. Two sailors are killed and 23 are wounded. Five civilians aboard the ship are wounded.

1939 – US ends commercial treaty with Japan

The United States rescinds the 1911 Treaty of Commerce and Navigation with Japan.

Robert Shivers arrives in Honolulu as the head of the FBI in Hawaii to assess the loyalty of 160,000 Issei and Nisei in the event of war with Japan. He plays a major role in preventing the mass incarceration of Japanese-Americans in Hawaii after Pearl Harbor.